The Unsheltered Male and the Covid-19 disposable wipes

July 16, 2020
Doing nothing is like flushing them down the toilet they are disposable 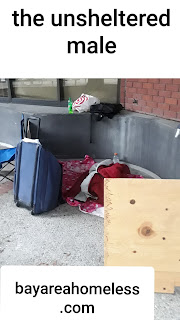 In December 2019 Pete Bennett attacked again in the Walnut Creek Library once again Walnut Creek police officers refused to create the required police report.
After 40 Years of tickets fines arrest beatings and muggings Bennett began to challenge multiple agencies including the former District Attorney's office.
I'm pretty sure the most recent attack where I nearly lost my life was witnessed by Department of Justice state of California parallel to the CHP.
It happened with the judge who gave me the tickets and then took the fines an added $15,000 onto my existing tickets.
When tenant files claims they simply start the pattern of killing Witnesses up until everyone's dead except Bennett.

Huts for the Homeless

Coming Soon - New Rollout based on research, interviews and solutions

If you need information please call